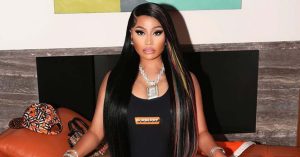 After performing at festivals including Essence and Wireless, the rap queen is gearing up to drop her new single “Freaky Girl” and fifth studio album. On Friday, she opened up about the project while checking in with her Barbz ahead of the first episode of her relaunched Queen Radio show.

“The album is gonna be fu**ing epic,” she said of the long-awaited follow-up to 2018’s Queen. “I was listening to the songs yesterday and I just was falling more and more in love with the way everything is feeling right now, in relation to the music and to my fans.”

She has realized to trust the process and not overthink. “I do think at some point I probably was doing a lot of overthinking and waiting and yada yada yada,” she continued. “And then I realized, it’s so important y’all to have fun with life and as I always say, be in the moment, try to be in the moment. And do your best.”

And she is not interested in gimmicks, only giving her fans the best music while pushing herself as an MC.

“I don’t really worry about it anymore. I used to. But now I realize, I just have to give my fans music that they f**k with, give them the reason why they started fu**ing with me in the first place. And I will rely on that. I’m not gonna rely on anything else. I don’t have any fu**ing gimmicks. I don’t have it. I’m gimmicked out, bitch.”