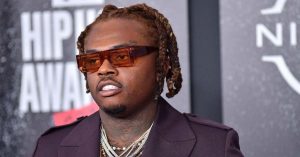 The Atlanta rapper checked in with his family while he awaits trial in his high-profile RICO case. In a clip, which was uploaded to Instagram, Gunna was seen on a video call with a toddler who is reportedly his godson.

He was all smiles as he joked with the young boy and his mother. “Sounds like a real player though,” Gunna told the child, who appeared amused by his commentary.

Gunna appears to be in good spirits while on a video call from behind bars with his Godson. pic.twitter.com/0K58Fi6oxU

Gunna was recently denied bond again after a judge agreed with prosecutors and decided that he poses a threat to the public and could intimidate other witnesses if released. He is expected to remain in jail until his January 2023 trial date.

The 29-year-old was arrested in May and charged in a 56-count RICO indictment that includes Young Thug and other members of YSL. Prosectors claim that he is a “documented” member of the alleged Young Slime Life street gang.

Gunna has remained positive despite his circumstances. On his 29th birthday, the “pushin P” hitmaker reflected on his situation in a letter from jail.

“2022 has been one of the best years of my life, despite this difficult situation,” wrote Gunna, who was charged with a single count of conspiracy to violate the RICO Act. “For now, I don’t have my freedom. But I am innocent. I am being falsely accused and will never stop fighting to clear my name!”

He spoke out against the “ugly and untrue” accusations, while remaining confident that justice will be served. “I have all faith that God will grant me justice for the purity in my heart and the innocence of my actions,” said Gunna.

He continues to receive support from his peers including Drake, who shouted out YSL in his recent video for “Falling Back.”

DJ Khaled Shuts Down Fan Who Tries To Get In His Car: ‘Ladies, I’m Taken’