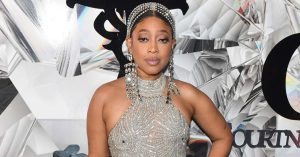 A 17-year-old girl was shot and killed in Miami on Tuesday night. Sources close to Trina confirm to TMZ that it was her niece, who the rapper affectionately referred to as “Suga.”

Miami police as well as the medical examiner responded to the scene where the female victim was pronounced dead. Two other women sustained gunshot wounds and were taken to Jackson Memorial Hospital. Their condition is currently unknown.

Law enforcement sources tell WSVN 7 News that it appears the teenager was visiting the area. An investigation is underway to determine if the attack was random or targeted.

Police were seen looking for evidence outside an apartment complex and were focusing on a black Mercedes SUV about a mile north of the crime scene.

Family members identified the victim as “Suga,” a high school student who was about to begin her senior year.

Trina has not addressed the shooting. Rick Ross was among those who shared their condolences, leaving prayer hand emojis on The Shade Room.