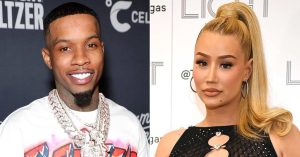 The Toronto rapper has social media buzzing once again after he praised the “Fancy” rapper’s cooking skills. The Shade Room reposted a photo of Iggy’s ox tails, prompting a response from Tory, who confirmed that Iggy can throw down in the kitchen.

“It was hitting too,” he commented, fueling speculation about their relationship status.

Just weeks ago, an alleged photo surfaced of them showing PDA while dining together in Miami. Iggy’s hand appeared to be on Tory’s leg. Tory has also been liking Iggy’s Instagram photos and leaving comments.

Tory Lanez and Iggy are messing around . It’s been going on for a few weeks now😌 pic.twitter.com/tg1nA9FWA4

While neither has confirmed the romance rumors, Iggy seemingly responded to her critics on Twitter.

Iggy was previously in a relationship with Playboi Carti. The two share a 2-year-old son, Onyx. In October 2020, Iggy revealed that she had split from Carti, whom she started dating in late 2018.

Last month, the Aussie rapper celebrated her 32nd birthday. “This year, I’m betting on me more than ever,” she wrote. “Betting that any space I clear, is only to welcome deserving things & people into my world.”