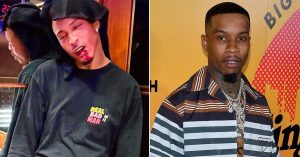 The R&B singer claims that Tory attacked him after he was leaving a show at the Arie Crown Theater in Chicago on Saturday night. On Sunday, he shared a photo of himself with a bloodied mouth while detailing the incident.

“A 4’11 sized leprechaun ran down on me w/ 8 oversized security nigxas, whom I greeted each individually upon their walk up as they tried to press me,” August wrote. “Whole time, I’m one deep. No security.”

August says the attack occurred after he didn’t greet him. “Tory continues to ask w/ a broken ego why I didn’t dap him up, I go on to tell him.. I was a fan of him and didn’t understand him speaking on my business publicly In the past, because I don’t know him or ever met him until last night.”

He also alluded to Tory taking shots at him back in 2020 when he rapped about his relationship with Jada Pinkett-Smith. He assumed that Tory didn’t like him and didn’t feel the need to pretend to be friends.

“So when he spoke it caught me off guard because of his past actions, i assumed he didn’t like me, that’s all,” added August.

August says he doesn’t shake hands because of his “history of health” including his paralyzing autoimmune illness.

He goes on to claim that there were “never any disrespectful words exchanged” and accused Tory of “hitting a blunt laced with cocaine.” “There was never a ‘fight’! Simply an Assault,” he added.

For his part, Tory has denied that he was even in the building and was in the studio. “I don’t know what everybody talking about …. But I’ve been in the studio,” he wrote in an Instagram Story. “I’m not in anything negative … Ive been working on my self …. And being a better person.”

Hold up, did Tory Lanez knock out August Alsina? Apparently so 🥴

Tory did respond to the rumors via IG. pic.twitter.com/4o2F9RmwS5

However, August says the incident was captured on camera by Tory’s own crew.

“Dude has no real friends, and is on a crash out mission,” he said. “With that said, I was gone keep it G & not come to the net, but you moving with foul intent feeding falsities to blogs to look for a ‘moment’ cus them moments ain’t happening on stage for u. I will assist you in that, gracefully. His ppl got the whole thing on camera, PUT. THE. FOOTAGE. OUT!!”