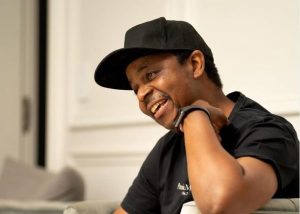 The legend has achieved numerous things within over 3 decades in the music industry; from opening the industry to new talents, to the launching of his record label, Kalawa Jazmee in 1992.

Oscar is less bothered about people’s opinions, as he jumps on anything positive and flows with it.

He enjoys inspiring people, especially young artists as he graduated from the University of Pretoria with distinction this year 2022, where he studied Project Management.

This social media platform is commonly used among Gen Z, but the SA star refused to be left out, as he’s successfully cracked tons of ribs with his content.

Oskido has trended a couple of times due to his Tik Tok content, in which he played and nailed different characters.

The 53-year-old is intentional about not making himself redundant in the entertainment industry as he’s blatantly grown from a Legend to a Tik Tok sensation.

We love to see the legend’s funny and dramatic sides, hence we will be sharing 5 enjoyable Tik Tok videos of the star.

What do you think of Oskido’s new personality?

Watch the videos below:

Free Creative Dj & W4DE Tango Mp3 Download Creative Dj is back with another track that exemplifies his ability to...

Free L.A.X Rora Mp3 Download L.A.X is a music singer who has come through with a new Song titled Rora....