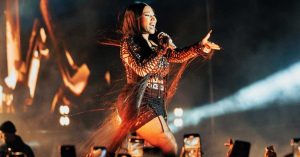 Nicki Minaj made a royal return to her hometown to headline Rolling Loud New York with some surprise guests. Taking the main stage at Citi Field on Friday, Nicki opened her set with “We Go Up” before being joined by New York’s own Fivio Foreign.

Rocking long black hair down to her feet, she ran through hit after hit including “Did It on’em,” “Beez in the Trap,” “Truffle Butter,” and “Chun-Li.”

The surprises continued as she brought out BIA for “Whole Lotta Money.” “Make some noise for my little sister BIA,” Nicki said as the two held hands.

I love watching Nicki & Bia together it’s so real and genuine which is so rare in the music industry happy to see BARBIA striving @NICKIMINAJ #NickiRollingLoud @BIABIA pic.twitter.com/iYLOlJBXxE

Lil Uzi Vert hit the stage for “The Way Life Goes,” followed by G Herbo, who held court with the Queen for “Chi-Raq.”

Lil Uzi and Nicki Minaj really was a MOMENT 4 ME #NickiRollingLoud pic.twitter.com/4APyqfk5Xz

Following “Super Bass,” it was a true moment for life as she capped off her 40-minute set by performing “Moment 4 Life” acapella as the Barbz sang along to every word.

Earlier in the evening, Playboi Carti brought out Kanye West to perform “Off the Grid.” Lil Tjay also returned to the stage for his first performance since he was shot seven times during an attempted robbery.

Watch the Queen in all her glory below.