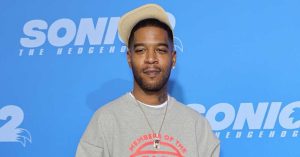 Ahead of its release, he has revealed the tracklist. Ty Dolla $ign makes two appearances on the previously-released single “Willing to Trust” as well as “Can’t Shake Her.” 2 Chainz teams up with Cudi on “Can’t Believe It,” while Don Toliver drops in on “Somewhere to Fly.” The bonus track “Burrow” features Toliver, Steve Aoki, and Dot Da Genius.

Inspired by his 2009 song off Man on the Moon: The End of Day, the “visual album” serves as Cudi’s eight studio LP and a companion to his animated Netflix special of the same name.

“I’ve seen people attempt it, and I just never wanted to come off like I’m doing anything that anybody else is doing,” Cudi told EW. “So I needed to take some time to really think, ‘What is my angle?’ — because I like to think I’ve been ahead of the curve with a lot of things in my career. I just want to keep applying that.”

“The first time I watched Entergalactic, I cried at the end,” Cudi said. “And look, I know what the show’s about: I’ve read every script, I’m in the show, I know how it ends. But it was still so powerful that it moved me, man.”