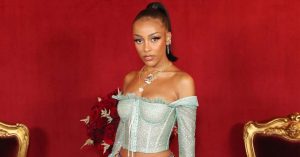 Taking to Instagram, the “Kiss Me More” rapper proudly showed off the new tat to her 24 million followers. The red heart appears on her left butt cheek with an arrow through it and says “Sex Goddess.”

Doja shared a selfie posing in her kitchen mirror in a black bikini, heels, and cowboy hat, along with a second pic zooming in on the booty tat. “first tattoo ever 7/23/22 i love it,” she captioned it.

It’s unclear if the tattoo is real or just temporary. Many fans seem to believe she’s just trolling them with a fake tat.

Doja is on the move. She recently listed her Beverly Hills house for just under $2.5 million after purchasing it in February 2021 for $2.2 million. The 2,400-square-foot midcentury modern digs include four bedrooms and two bathrooms.

In May, she announced that she would be dropping out of The Weeknd’s “After Hours Till Dawn” tour after undergoing emergency tonsil surgery. She has been working on new music in the meantime and collaborated with SZA on the long-awaited “Shirt.”