Coming from Tacoma, Washington, Trufant is now one of the best cornerbacks in the NFL. The outstanding American player is playing in NFL for the last seven years.

Following the footsteps of his brothers, he debuted in the national league in 2013. He now plays for Chicago Bears, but he is famous for his spell at Atlanta Falcons (2013-2020).

He was inspired by his two brothers (Marcus & Isaiah), who also played in National Football League. 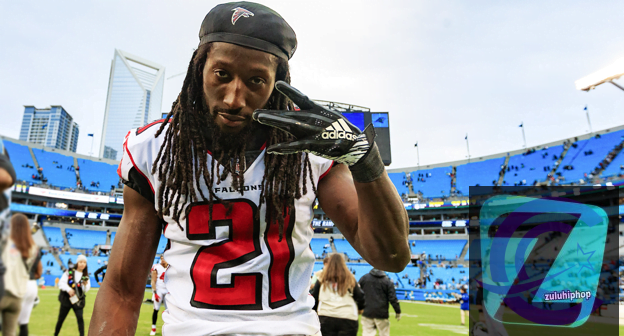 This article will take a closer look at every detail of his personal life, career, early life, salary, and social media presence.

Before that, here we present you with some facts about Desmond Trufant.

Desmond Trufant was born on September 10, 1990, to his parents Constance Trufant and Lloyd Trufant.

He was born in the city of Tacoma, Washington. Des is the youngest among three siblings of the Trufant family.

He grew up playing in the local teams of Tacoma. For his high school education, he joined Woodrow Wilson High School.

After graduating from high school, he got scholarship offers from many colleges and Universities. He chose the University of Washington for his further education as well as for his football career.

And the interesting fact is that both of his brothers were also cornerbacks.

DESMOND’S BROTHERS MARCUS AND ISAIAH BOTH PLAYED IN THE NFL.

The first son of the Trufant family, Marcus started his NFL journey from Seattle Seahawks in 2003. He led the Seahawks defense from the corner for ten years.

Undoubtedly, he was one of the best cornerbacks of his time. The fact that the Seattle Seahawks kept him for ten years tells everything about him. 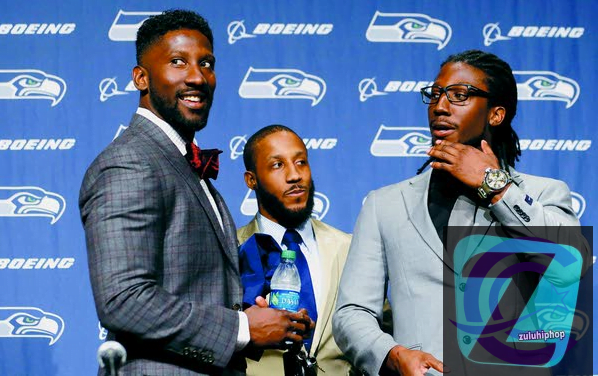 Desmond’s other brother, Isaiah, played for New York Jets from 2011 to 2013. Isaiah didn’t get as successful as his brothers in the NFL, but he definitely has the experiences of many leagues and clubs.

He achieved success in the NFL during the later stages of his career using his experiences.

Moreover, the brothers have a perfect relationship. They praise each other on occasions and also posts about them on social media.

He has an athletic body figure, but we don’t have the exact figure of his body measurement. The Tacoma-born footballer has long black hair and a pair of black eyes.

Moreover, he is an American nationality and belongs to the mixed ethnicity group. Unfortunately, we don’t have the information about the religion he follows.

The success of his big brother, Marcus, inspired him to play football from a very young age. After the NFL selection of his other brother Isaiah, he also set his target to play in the National Football League.

He also achieved a little success as a triple jumper and long jumper in a track race. Des became runner-up in the Class 4A State Triple Jump track meet.

He secured 11th position on the long jump and played basketball in his junior year.

Rivals.com judged Trufant as a 3-star recruit and 56th best cornerback in the whole nation. However, he left many offers to join Washington State University.

He played for Huskies from 2009 to 2012. He earned a place in the first-team All-Pacific Eastern Conference-12 as a senior.

As a cornerback, he helped the team to reach the 16th rank in pass defense in the college football season 2012.

Atlanta Falcons picked Desmond in the first round (overall: 22nd) in the 2013 NFL Draft. Position-wise, he was the third cornerback to get selected, behind Dee Milliner (overall: 9th) and D.J. Hayden (overall: 12th).

The Falcons training camp was filled with cornerbacks, so Trufant had to fight for his team position. He competed with Robert McClain, Asante Samuel, and Robert Alford for the two cornerback positions.

Falcons head coach Mike Smith was impressed by his performance and selected him for the starting position and Asante. 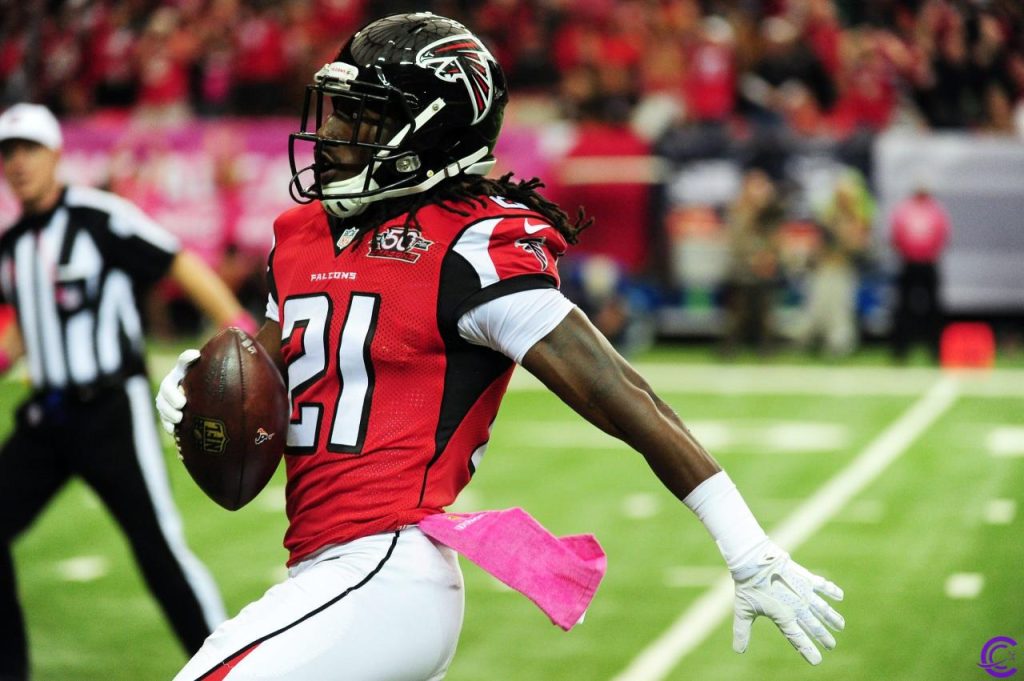 Des playing for the Falcons.

After that, he made his NFL debut in the season-opener loss against New Orleans Saints. Again, Trufant started with one after another impressive performance.

He recorded a season-high combined tackle of seven and broke up a pass against the Tampa Bay Buccaneers. Then, on November 3, he recorded his first career interception.

Trufant proved his talent to everyone. Pro Football Focus ranked him eighth on the list of all cornerbacks, giving a rating of 75.2.

Atlanta Falcons released Samuel in 2014, which made Trufant the first-choice cornerback.

Further, he recorded the season-high 7 combined tackles against the Buccaneers on November 9. Sadly, the Falcons did not qualify for the playoffs again in 2014.

Although the bad team performances didn’t affect him much, he recorded 61 combined tackles and 16 pass deflections in the 2014 season.

Trufant recorded his first career sack on Matt Hasselback in week 11. After a week, he recorded his season-high six solo tackles in a loss against Minnesota Vikings.

However, he obtained his first career Pro Bowl selection. Also, he was chosen as a substitute for the 2016 Pro Bowl.

On October 16, 2016, Trufant made his first sack of the season against Russel Wilson in a 26-24 loss at the Seattle Seahawks.

Trufant made four solo tackles in week 9. Sadly, he suffered a shoulder injury and got out of the squad because of surgery.

However, that season Pro Football Focus gave Trufant an overall grade of 78.9, ranking 30th among all qualifying cornerbacks in 2016.

Further, the Falcons made it to the Super Bowl LI with an 11-5 record. But, unfortunately, they lost by 34-28 against the New England Patriots after leading 28-9 in the third quarter.

Desmond Trufant signed a five-year contract worth $68.5 million on April 8, 2017. He once again silenced his haters and came back from injury showing better performances.

Moreover, Trufant missed just one game that season because of injury.

In 2017, he played 15 games and recorded 41 combined tackles, two interceptions, twelve pass deflections, a sack, a touchdown, and a fumble recovery.

Pro Football gave him the overall grade of 84.9 and ranked 19th among cornerbacks.

Trufant suffered multiple injuries throughout the season of 2019, which eventually became his last season at the club.

But after just three games, he again suffered another injury in his arm and was ruled out for the rest of the season.

Atlanta Falcons released Trufant on March 18, 2020. He played in Atlanta for seven seasons.

On March 20, 2021, Trufant signed a one-year contract with the Chicago Bears.

Desmond Trufant | Net Worth and Salary

It is no surprise that Trufant lives a lavish life, and he certainly deserves that. Besides that, he has worked hard to come up to this level.

He has given all his strength and time to football and has made a successful career out of his games. According to online sources:

Moreover, he signed one year contract worth $1.75 million with Chicago Bears in 2021.

From bears, he will receive an average annual salary of $1,075,000, which probably exceeds the market value for a good but not exactly elite cornerback.

Previously, he got $5 million as a signing bonus. Being one of the best cornerbacks in the NFL, he totally deserves that amount.

Besides that, he also earns a respectable amount from his sponsorships, endorsement deals, and advertisements. Currently, he has a sponsorship deal with Adidas.

Trufant likes to keep his personal life away from the eyes of the media. But, according to different online sources, he is still single. This might be excellent news for his fangirls.

He is already thirty years old, and there is not a single piece of news about his relationships yet.

So now we can safely say that the talented player is entirely focusing on his career instead of being in a romantic relationship.

Also, Trufant’s thoughts and time are mostly occupied with his matches, training, practices, and other basic stuff, even to have time to think about casual relationships.

However, we do hope he finds someone special to spend his time with. As age goes by indeed, Desmond will surely have someone by his side.

We will be the first to let you know about his relationship affairs as soon as we find any news.

What is Desmond Trufant Jersey number?

Desmond Trufant currently plays as number #21 for the Chicago Bears.

How many games did Desmond Trufant play?

Why did the Falcons get rid of Desmond Trufant?

According to reports, the Atlanta Falcons released cornerback Desmond Trufant because the team failed to find a taker on the trade market. The issue of finding a trade partner was the main reason for his release.

What is Desmond Trufant Vertical Leap score on NFL?